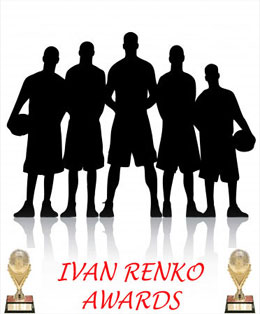 ...but who the hell is Ivan Renko?

Once upon a time back in 1993, a 6-foot-8, 230 pound power forward from Yugoslavia (Serbia) entered the recruiting world off the lips of Indiana’s head coach Bobby Knight. Knight brought media attention to the player claiming that he committed to play for Indiana.

Knight's story was that while attending a coach's clinic in Europe, he was made aware of the player. His account of Renko's living conditions in the war torn country created a high buzz. But what happened next is one of the greatest April Fools jokes of in all of sports. Various experts responded by ranking Renko and publishing scouting reports. One even proclaimed him to be a white Larry Johnson, which today is like saying he's the next Kevin Durant. Another expert claimed to spot the strapping power forward on Indiana’s campus. But how could this be when Knight made the whole thing up?

Renko is imaginary. He never existed. Knight concocted him to expose the so-called recruiting experts he doubted were providing real scouting information.

This is the backdrop to the Ivan Renko Awards. It's given to the players who seemingly appeared out of nowhere with tremendous hype and acclaim through various media outlets. But like every award, there are stipulations. The draft nerd (that's me) lists the following Renko Awards from 2000 onward:

2000: Kaniel Dickens – What do you get when you combine tremendous athleticism and show the ability to hit an occasional three point shot? The Answer is Dickens. What the Jazz wanted was Bryon Russell 2.0 what they got wasn't close Dickens played 19 games in the NBA.

2001: Kedrick Brown – Brown is the highest a juco player has gone and may be the reason along with Alek Radojevic why no other Juco players have been taken as high.

2002: Peter Fehse – The Seattle Supersonics admitted they didn’t even scout him. One would think an NBA draftee would have a productive career overseas, but Fehse has been anything but a star on any level, except the third division Germany league he was drafted from.

2003: Nedzad Sinanovic – The Portland Trailblazer's selection of Nedzad Sinanovic had many wide-eyed and open mouthed. After almost three years with the Bosnian Army, Sinanovic decided he was going to play basketball again. His agent had him signed and on his way to the Spanish club, Unicaja Malaga. Here, the raw prospect would workout, gain experience and training, but would never actually play for the team, giving him extremely low exposure to scouts and GMs. During this time Sinanovic developed tremendous potential, and because of his age, was automatically eligible for the draft. On purpose he was provided a non-English speaking agent and virtually no publicity, the prospect of going undrafted was all but certain. This fate, however, was what Sinanovic's agent was hoping for. Going undrafted equated to more dollars for the player. As a free agent, he would have bypassed the rookie pay scale and been able to sign a contract with any NBA team for an unrestricted amount. Needless to say, gone are the days of international surprises!

2004: David Young – It had been 21 years since the last time a player from North Carolina Central had it's name called on draft night. Young spent 3 years in the Atlantic-10 conference playing for Xavier College. Young transferred to North Carolina College and put together a fine season but was still under the draft radar. After some stellar workouts but teams like Seattle brought him back for a second workout. Sonics head coach Nat McMillian's brother randy was one of North Carolina Central's assistant coaches. Despite not having a write-up in the NBA's official draft guide Young proved his place among NBA prospects.

2005: Orien Greene - What do you do when you're not getting playing time for a great team in a tough conference? You apparently transfer to a lower division and create a niche for yourself. At 6-4, Greene’s specialty was his self-proclaimed point guard status. With the love of a few media outlets, the Boston Celtics bit. But it turns out they ordered up the wrong meal. A greasy hamburger of a player can't be transformed into a juicy steak.

2006: Ejike Ugboaja – "Who in the world!" basically sums up my thoughts on draft night. I obtained his profile stats through some detective work. He has yet to play in the NBA and I doubt he ever will.

2007: Milovan Rakovic – I had the opportunity to see this guy play several times, and each time I came away with the thought that Rakovic is a career overseas player who will play in a decent league, but not with a premier overseas team. Who is his genius agent? He's definitely earned more than his standard commission. Give that man double.

2008: Patrick Ewing_Jr. – You wouldn’t think being the son of an NBA Hall of Fame player Patrick Ewing that Ewing Jr. would be on this list. Ewing worked hard through the predraft camps and slowly gained respect from scouts who had written him off. Despite this on draft night few had him pegged as a guaranteed draft pick. Ewing Jr. now works as the director of basketball operations at Georgetown.

2009: Taylor Griffin – No offense, but no one on draft night (except maybe his brother, Blake, and their parents) felt that both brothers would be drafted. It smells like an Agent favor, but thanks to his brother, Taylor had one of the best sports agencies backing him up.

2010: Ryan Reid – A valuable member of the Florida State basketball team Reid established himself as a tremendous post defender. With his limited upside and marginal offensive skills Reid’s selection was surprising.

2011: Chukwudiebere Maduabum & Tanguy Ngombo – A tie as both prospects were far from anybody’s draft list. Maduabum was essentially drafted out of the NBDL and never showed much of anything other than being tall. Ngombo was one of David Khan’s more mindboggling selections. Hilariously it later came out that Ngombo might have lied about his age that he was not 21 but 27 years old!

2012: Tomislav Zubcic – Another overseas player who was drafted like Peter Fehse after a face-up forward model of Dirk Nowitzki and Andrea Bargnani. Great shooter terrible rebounder and a marginal athlete I doubt he will ever reach the NBA.

2013: Arsalan Kazemi – Not that Kazemi was unknown by scouts but the general public knew very little of him. He wasn’t on anyone’s top 75 draft list other than the Wizards. Great hustle player with limited upside has yet to play a game in the NBA. He is the NBA's first Iranian draftee.

2014: Bruno Caboclo – No player has been such a surprise to go in the first round since Martin Muursepp in 1996. Extremely young with potential yet the comparison to being the Brazilian Kevin Durant seems like a huge stretch.

2015: Juan Pablo Vaulet – So much of a surprise was Vaulet that even his native country was shocked by his selection. Vaulet is a young prospect with developing skills but nothing exceptional. Could he be the next Argentina draft steal like Manu Ginobili or enter the realm of the forgotten like Federico Kammerichs.

2016: Adel Nader – Everyone knew about his college teammate Georges Niang but few fans knew of Nader. Apparently part of his selection had an agreement that Nader would be stashed in the D-League. This past year Nader was named the NBA D-League Rookie of the Year. Time remains to be seen if his selection was genius or a reach but it certainly was a surprise.

Congratulations to the Ivan Renko clones. So who's next? As if there won't be one every year! Someone is going to take a risk for no good reason. TDR will be here with draft day giggles to hand out the Award.
1 comment