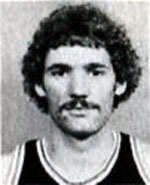 Kim Goetz, 50, passed away on Monday, March 17th, 2008 from an apparent heart attack a short time after playing tennis with a friend.

He played on the 1976 Junior College championship team for College of Southern Idaho. After transferring to San Diego State, Goetz was given the nickname "The Long Ranger" for his stellar perimeter shooting. In today's game, he would have no problem as a 3-point marksman, similar to 2003 NBA draftee Kyle Korver. Goetz scored 1,005 points in just two years with the Aztecs and still maintains the school record of an amazing 90.2% from the free throw line. He was drafted by the New York Knicks in the 1979 NBA Draft as the 34th pick overall and was later inducted into the CSI and Aztec Hall of Fames.

Goetz was a Special Education teacher at San Pasqual High School. An old friend remarked to The Draft Review that "he was a wonderfully sweet boy, who, like his brothers, was enormously talented athletically". Goetz is survived by his wife, Annette, and their daughter, Stephanie.

1234
0 #37 François 2011-02-24 05:49
As i tried today to find what become basketball players from my team in Nyon, Switzerland, i have found that Kim passed away, much too early. I will remember as may be the best shooter i have ever seen in the Swiss Basketball, and as a positiv person in the sport and personal life.
and even 3 years later, en pensée avec sa femme, sa fille et Kevin qui a aussi joué en Suisse.
Quote
0 #36 Craig Everett 2010-12-12 19:17
I played ball with Kim at Southern Idaho. He was a great guy and an unbelievable shooter. I was shocked to hear of his passing. Only good thoughts about Kim.
Quote
+1 #35 Joe kiblen 2009-02-11 04:49
I miss you kim, you were a great friend to my dad, Tom Kiblen, and to me too. I will try to help of Annette and Stephannie. Go Aztecs
Quote
+1 #34 cynthia micinski kiblen 2009-02-06 17:21
I was lucky to meet Kim and his lovely wife, Annette, through my husband Tom.
"Some people come into our lives leave footprints on our heart and we are never the same." flavia. I miss you.
Quote
0 #33 Steve Myklebust 2008-04-23 08:15
I too grew up with Kim and Manny and Greg and Scott and all the other Moscow guys.
The baskeball games we had at the Goetz house were legendary. I always played on Kevin's team because I was short and awful. I will always remember those games.
And Kim's sense of humor. Kim gave every kid in Moscow a nick name I think.
Now Kim and Kibbee can re-unite with Jeff Jacksha and watch over the rest of us.
Quote
0 #32 Bill Stokes 2008-03-30 19:34
My deepest simpathies to Dave, Greg, Kevin and their families. I grew up next door to the Goetz family. Herm owned the Corner Club, my Dad owned Mort's Club, both popular bars in Moscow. The Goetz yard was the center for all games played in the neighborhood. Conga, no bears, kick the can, whiffle ball, hoop. So many great times with a great guy like Kim.
Kim, Buzz, Reese. You will be missed
Quote
0 #31 Paul Gale 2008-03-27 10:30
I grew up with Kim in Moscow. He and is family were the greatest, I really miss those days. I wish there was something I could do for Reese and Kibby's family. I am sorry I lost touch with them. Reese was my hero.
Quote
0 #30 Tim Sullivan 2008-03-26 10:17
I grew up in Moscow, just around the corner from Kim. I didn't know him well, but I knew him. Very friendly, everyone liked him, no ego problems and he was the greatest athlete ever coming out of Moscow.

I'm saddened by his passing. Truly a great person. Thanks for the memories, Kim.
Quote
0 #29 Andrew Foster 2008-03-25 17:30
I had been playing tennis with Kim once a week for the past 20 years, in that time I feel blessed to have been one of his close friends. My family and friends will always remember him as a very kind and loving guy- My heart goes out to his family and friends.
Quote
0 #28 Lorraine Lewis-Andela 2008-03-25 08:35
On behalf of Kim's cousins from Washington, the Lewis family, Thank You All for the memories, prayers and condolences. Our Father was Kim's Mother's only sibling... The 4 of us: Lorraine, Brian, Karen and Jeff practically grew up in Moscow too. We spent a lot of summers there!...on the porch, at the Corner Club, watching games, "punchin' butts", drinking Rainiers in cans, going to the "Quiver Hut", and Chinese Food!
Kim has always been the the kindest soul...It is so nice that so many felt the same way too. Like his 3 brothers: David, Greg and Kevin, we were all graced with his eternal positiveness. And in his honor, let's all try to hold on to that positiveness and make him proud.
Quote
1234
Refresh comments list
RSS feed for comments to this post