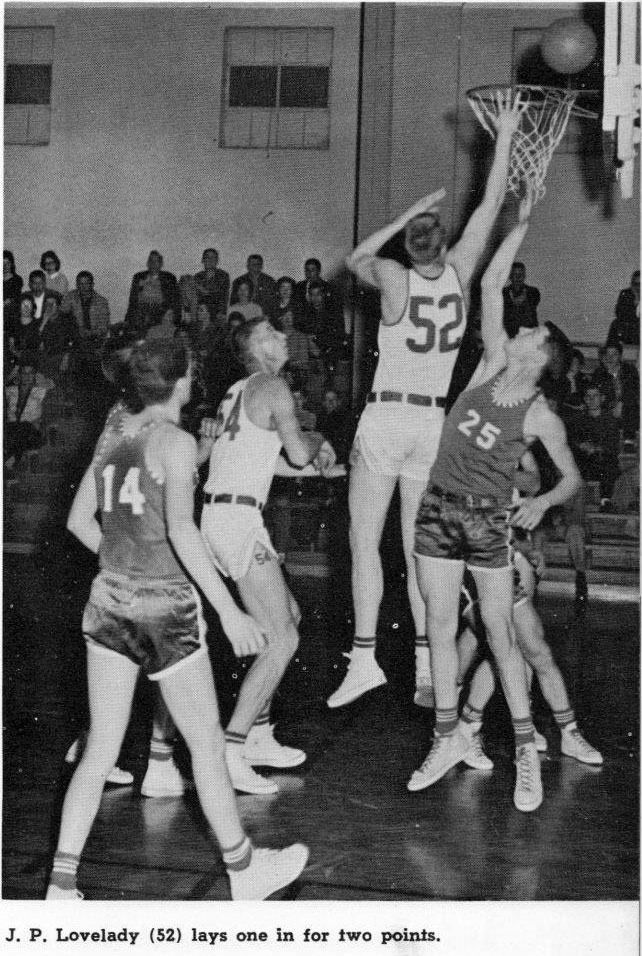 I had first heard about J.P. Lovelady when reading an interview of NBA super scout Marty Blake. Blake ever the great story teller actually repeated this story several times throughout the years. Luckily I found several newspapers who he relayed the same story.

Depending on who wrote the article small details change but the gist remains the same. Blake in 1961 was the general manager of the St. Louis Hawks who had earned a respected reputation as a guy that will draft talent from anywhere. Always on the scouting trail Blake’s began to follow J.P. Lovelady and had made several inquiries with coach Sam Hindsman about the possibility of Lovelady playing for them.

With good reason as Lovelady was making quite a name for himself at Arkansas Tech. Upon his enrollment Lovelady as a freshman guided the team to an NAIA tournament berth. They garnered the 5th seed but after a week of the team battling the flu prior to the game they lost a 6 point squeaker to West Virginia Wesleyan.

The impact of Lovelady wasn’t lost by many observers who hadn’t seen this level of talent at the school since Deward Dopson had been drafted by the Minneapolis Lakers in 1951. The sophomore year was delayed for Lovelady a little bit as grade issues limited him to just 12 games. Despite the abbreviated season Lovelady dominated the NAIA competition having his best statistical season averaged 24.4 points and 17.3 Rebounds per game.

Lovelady was an incredible versatile athlete. That versatility enabled head coach Sam Hindsman to move him around regardless of position. As the need of the team changed so did Lovelady’s position. As a freshman he played center, sophomore year he played forward and with the recruiting win of future NBA Draftee Kenny Saylors Lovelady would settle in at guard.

Playing in his new role did wonders for Lovelady’s pro prospects. Instead of an undersized center or forward Lovelady had all the makings of a modern pro guard. Able to dribble, shoot from the perimeter and play tough man to man defense. Unlike modern basketball accolades meant more because of the lack of ability to earn publicity. A four time ALL-AIC (Arkansas Intercollegiate Conference) selection who was also named as an honorable mention selectee on the 1961 Associated Press Little All-American team a senior. Lovelady’s Arkansas Tech teams won 73 games and won three AIC championships.

The Problem
February 10, 1961 went perfect for Lovelady after putting up 23 points and 14 rebounds against AIC rival Ouachita Baptist 98-72 spirits were high. The team was 14-1 and looked like a favorite to get back to Kansas City for the NAIA Tournament championship.

Two days later in the early Sunday morning Lovelady was critically injured in an automobile accident. When leaving the highway the sharp curve of the exist sent the car barreling into a 4x4 post on the side of the road before having it’s movement stopped by a big tree. Alone at the time the front of the car was completely caved into the front of the seat. The car was totaled to such an extent that police officers had to physically pull the door apart to retrieve the pinned Lovelady. The 22 year old was rushed to Russellville Hospital where the extent of his injuries were revealed. Because of the impact all the injuries were on the right side of his body. A collapsed lung, six broken ribs, broken collarbone and some possible back injuries.

Despite being listed by the hospital as being critically injured many close to the situation were encouraged with the improvement after a couple days of treatment at the hospital . Coach Sam Hindsman did his best to keep face for the team and the community but his reluctance to speak publicly to the press spoke volumes of how much danger Lovelady was still in.

February 18th news started to come out that doctors were amazed with how well Lovelady’s body was responding to treatment. X-rays revealed there was no damage to the back or legs. Not only had it looked like his basketball career and health were safe but that he was going to make a full recovery.

The upbeat news took a grim turn on the early morning of February the 23rd as Lovelady awoke and complained of chest discomfort. The pain was caused by a blood clot which rapidly formed in his lungs. Side note I found another article from a relative of Mr. Lovelady who said that a blood clot had formed in his leg dislodged and traveled to his heart. Unfortunately clots don’t usually reveal symptoms until it becomes crucial. Tragically at 3:00 PM Lovelady died.

Two days later the funeral for the once promising star was held at Dover High School Auditorium where it was attended by hundreds of people. One estimate was over 800 people attended. The Pallbearers were the entire coaching staff and players of the Arkansas Tech basketball team. One of the attendees was General Manager of the St. Louis Hawks Marty Blake.

The Conclusion
Lovelady’s name still echoes across the lips of older basketball observers of the Arkansas area. Till this day many list him as one of the finest all-around players to ever play in the state. Many have compared his talent to that of Jerry Sloan. Even coaches around the surrounding area had respect for Lovelady’s talent as legendary coach Abe Lemons once called JP Lovelady one of the best players to ever come out of Arkansas.

At the beginning of this article I mentioned how Marty Blake found and had every intention to draft J.P. Lovelady. But little did anyone know 26 years later Mary Blake would still benefit from being involved with Mr. Lovelady. Blake would run a scouting service for the NBA and organizes and manage the Portsmouth Invitational Predraft camp. At the funeral Blake met a young coach Arch Jones who later becomes the Athletic Director at Central Arkansas. Jones calls him in 1987 and proceeds to tell him about an under the radar player named Scottie Pippen.

Basketball Benefit games were played by the college to help soften the funeral expenses the family acquired. Even a baseball field was dedicated to the fallen local hero. Today it’s the JP Lovelady Park located in Dover, Arkansas.

The Draft Review applauds J.P. Lovelady for his collegiate accolades and recognizes him as a player that should have been a part of the 1961 NBA draft class. We include J.P. Lovelady in our list of honorable draftees.